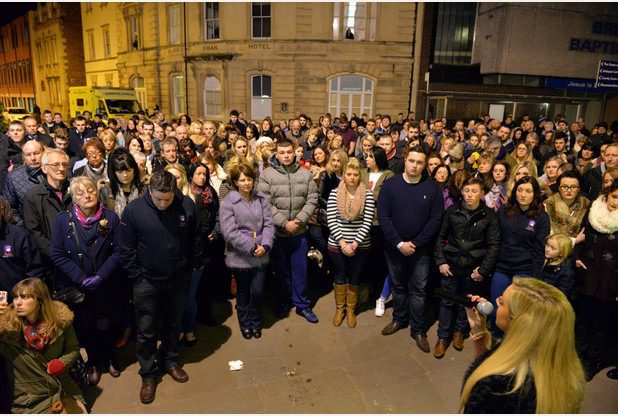 Hundreds of people gathered in a display of love and unity which has come to define how the community has helped and supported Hollie Gazzard’s family at the memorial service to mark the first anniversary of Hollie’s death.

There was not a dry eye in Southgate Street on Wednesday night as a vigil was held in Hollie’s memory at the spot her life was so cruelly cut short by her ex-boyfriend.

Many laid bouquets of flowers and lit candles. The emotional service was led by Gloucester Cathedral’s Reverend Canon Neil Heavisides outside the Fringe Benefits & La Bella Beauty salon where she worked and included prayers and songs, including those sung at Hollie’s funeral.

Ellie Higgs opened the service by singing Bruno Mars hit Just The Way You Are, followed by Rihanna’s Diamonds.

Ellie said: “I was honoured to sing at the service. It was incredibly emotional, I was a little nervous because there were so many people, but it went well.”

Hollie’s father Nick said the plan was to gather to remember Hollie, who was 20. He said: “It is sad Hollie is not here but tonight is about celebrating her life and the last 20 years. A year ago events changed our lives forever, which we will never get over. We have all had different strategies with how to cope with it. Hollie was very fun loving and had lots of dreams. She was only here for 20 years but she travelled and had seven roles in hairdressing in different parts of the country, including the cruise liner she worked on. She made an enormous amount of friends. Her dream was to open her own salon but the trust is about trying to make that happen.”

Last year the family set up the Hollie Gazzard Trust which aims to educate youngsters about domestic violence, train hairdressers and reduce knife crime in the city. So far the trust has raised £85,000 and has helped train six hairdressers in partnership with Gloucestershire College. The family is hoping to raise £250,000 this year and train six more hairdressers.

Micha Robinson from Fringe Benefits & La Bella Beauty Salon said: “It was a lovely service with a good turnout. There was a lot of support for Hollie’s family and friends.”

He said: “There are three people we would all like to thank and that is Nick, Mandy and Chloe for setting an example, the way they have built on Hollie’s life and are trying to improve the lives of others.”

Prayers were then read before a minute’s silence was held at 6.51pm – the time she died last year. The family then invited people to the Teddy Pub in Longlevens, where Hollie also worked. Kayleigh Bishop, who works at the pub, said: “Hollie was one of my best friends, she was an incredibly vibrant person. We had a very good turnout and staff served her favourite cocktail. She always made it and it contains vodka, blue ice and lemon.” 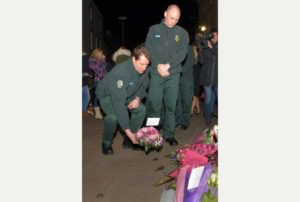 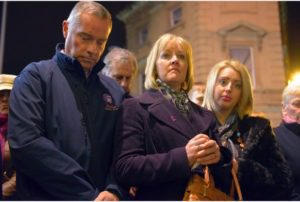 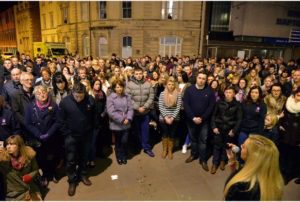