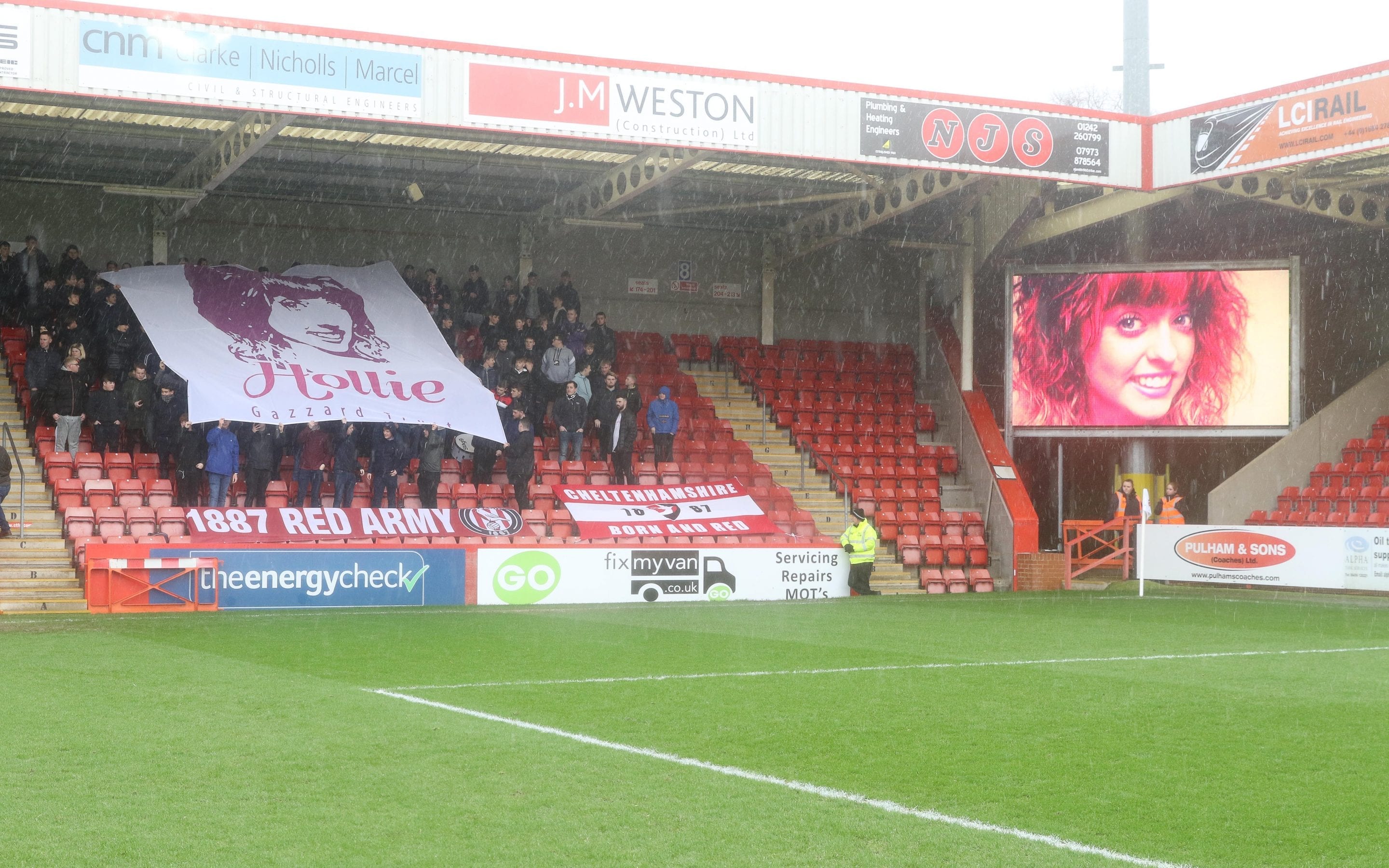 Since it was announced in the summer of 2019, the charity of the year partnership between Cheltenham Town Football Club and the Hollie Gazzard Trust has created a real buzz. Nick Gazzard, Founder of the Trust, is a former forward with the Robins in the 1980’s having made 45 appearances while scoring 14 goals, so there is a genuine affiliation and affection with the club.

Having held fundraisers in association with Cheltenham Town throughout the 2nd half of 2019, the home game against Leyton Orient on Saturday 15th February 2020 was a date all eyes fell on; the closest match to the 6th anniversary of Hollie’s death on 18th February 2014.

To add to the interest around this match, there was particularly good feeling between Cheltenham Town FC and Leyton Orient FC. Leyton Orient’s manager Justin Edinburgh sadly passed away during the pre-season in 2019 and the two teams played each other on the first match of the season. At that time Cheltenham Town fans showed amazing kindness towards their opponents by fundraising to buy a special flag to honour Justin.

In 2017 Cheltenham Town raised awareness for the British Lung Foundation by changing their strip for a home match versus Crewe Alexandra from the traditional red and white stripes to blue, in recognition of the charity colours. This encouraged months of collaboration between the Trust, Cheltenham Town FC and kit manufacturers Errea to create a Hollie Gazzard Trust inspired home kit for the match against Leyton Orient.

Nick Gazzard said: ‘’The club bent over backwards to make this happen. We knew it wasn’t straight-forward as not only did the club need to support the initiative but ratification from the English Football League (EFL) was required. Thankfully, with lots of hard work from many at the club, Errea, current sponsors and the backing of supporters the plans fell into place. It was incredible really that this could happen in modern football.’’

It was the first time in 56 years that Cheltenham Town FC wore an all-white kit for a home match. On the front was a splash of colour with the ‘Hollie’ logo, finished with a pink and purple trim. Inside the shirt one of Hollie’s favourite quotes was included ‘’Smile often, think big’’. This became the mantra for the campaign and embodied the spirit shown by everyone involved.

The Trust are hugely grateful to the regular sponsors Mira Showers, Marchants and RK Lewis, who agreed to sacrifice their sponsorship for this match. The special shirts were sponsored by Kirkby & Knott Financial Planning Ltd, who’s logo featured on the back, with the Skylight9 sponsoring the shorts which featured their logo. 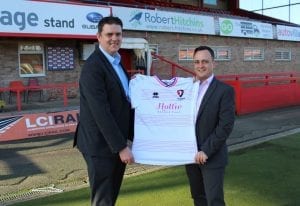 Nick said: ‘’From the moment the kit was launched we received so much support and kindness from everyone associated with Cheltenham Town FC and Leyton Orient FC. Two versions of the shirt were produced as EFL rules stipulated that a face could not be used on the match day shirts, which was fine. The player version had the text and we had some produced to include the full logo. We absolutely love both.’’

In the build up to the match Cheltenham Town FC announced that they would also be making an amazing £1,000 donation to the charity to support ongoing work. On top of the long hours of work put in to make this day even happen this was beyond expectations and greatly appreciated. To add to this, Leyton Orient FC very kindly made a donation of £500 as a gesture following the solidarity shown between the two clubs from earlier in the season.

Nick said: ‘’Cheltenham Town FC were a pleasure to deal with from day one. Finners (John Finnigan), Richard Joyce, Murry Toms and Luke Saunders put in so many extra hours I’m sure. Then to receive the donation from the club was just amazing. Thank you to all of you, also the club board of directors, manager, players and supporters for your kindness. We’d also like to thank Leyton Orient FC for their kind donation too as well who I’m sure have now become every Cheltenham supporters’ second favourite team!’’ 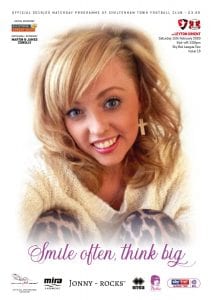 There was a lot of excitement in the days leading up to the match. Nick had been speaking with BBC Radio Gloucestershire, Gloucestershire Live, Heart FM and support rained in across social media. The matchday programme included a favourite image of Hollie on the front page in a tribute to her life. Another amazing gesture from the club and proudly treasured by the Gazzard family.

The weather on Saturday 15th February brought Storm Dennis, but that certainly didn’t dampen anyone’s spirits. Our army of Hollie Helper volunteers, lead by Fundraising Manager Klara Sudbury, pulled on the charity high-viz jackets and collection buckets to give supporters an opportunity to donate. Despite the wind and rain, around 3,500 supporters attended the Jonny Rocks Stadium for the match, and we’re pleased to say the bucket collections alone raised over £1,400. In the Robins Nest bar, a stall was set up to sell shirts, charity merchandise, take donations and where a shirt auction and signed match ball took place, raising another £1500. An amazing effort from our volunteers and incredible generosity from all supporters.

The 1887 Red Army, a Cheltenham Town supporters’ group, helped facilitate a large flag through Football Flags UK which was held high above supporters prior to kick off and later displayed next to the Justin Edinburgh flag. Their support for the team and charity has been outstanding, thank you to all of you. 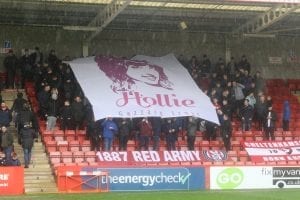 Despite the conditions, the match was anything but a damp affair. Leyton Orient took the lead, but Cheltenham Town fought back to eventually win the match 2-1, courtesy of a winning goal with just two minutes left on the clock. An incredible finish to a day that will live long in the memory. 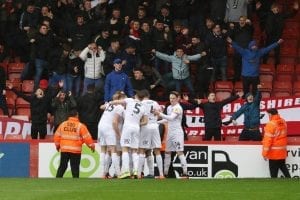 Nick Gazzard said: ‘’It all felt real when we first saw the players in the kit. It was such a proud day for me and the family. Wearing the kit was one thing, but to see the team do well in the game and eventually win was fantastic. The atmosphere at the end was unbelievable. The team are going very well in the league, up to 5th position, so there was a lot at stake for the manager and players. But they delivered and we’re so proud.’’

The action didn’t stop there though. Post-match celebrations were held in the Robins Nest, where winning goal scorer Rueben Reid’s shirt was auctioned along with a signed football by Tom Watt. Nick was able to say a few words before DJ Shippers hit the decks to continue the party until 9pm.

Following the weekend, all the players match-worn shirts were listed for auction via AMS Auctions. The interest in these was phenomenal and eventually raised over £3,500 for the charity.

Nick said: ‘’We’re delighted to announce that taking in to account all donations, shirt sales and auctions the total raised for the charity is over £8,000. Not only that, but the awareness and exposure for the charity has been overwhelming and we’ve received so many messages supporting what we do.’’

It really was a day the charity will never forget. We’d like to thank Cheltenham Town FC; the directors, staff, manager, players and supporters for everything they did to make this such a great occasion and for the kind donations. Everyone went above and beyond.

It really was a day to smile often and think big. 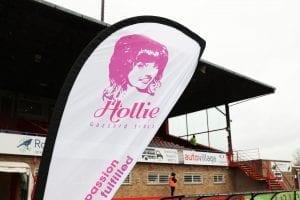 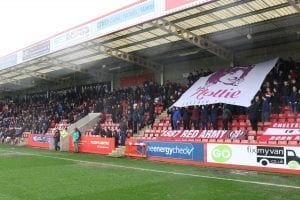 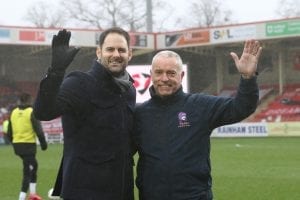