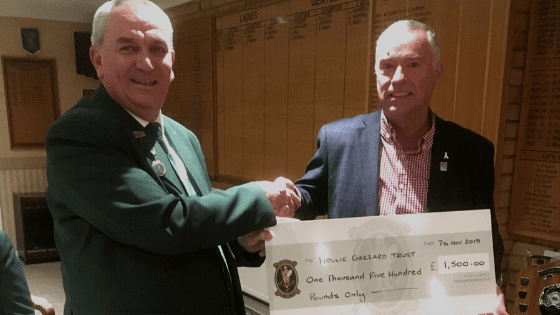 We were delighted to receive the outstanding support shown from Barnwood Bowling Club this month. Nick Gazzard was invited to a cheque presentation of £1,500 following a year-long fundraising campaign by the club. The Captain, Jon Horril, chose the Hollie Gazzard Trust as it was a charity close to his heart, as his daughter had worked with and known Hollie.

Jon, in his own words, outlines what the club have been up to and how they have raised such an amazing amount of money:

”The Captain of Barnwood Bowling Club nominates a charity each year to raise funds for during the season. We aim to choose a local charity to make it more relevant, and I chose the Hollie Gazzard Trust because of my connection with Hollie through the fact she trained at Reflections with Steph, my daughter. When I told members what charity I had chosen, everyone was aware of the tragic death of Hollie and keen to support the good work the Trust does. Knife crime has been in the news a lot this year, and anti-social behaviour domestic violence and stalking are also an all too common problem. The Hollie Guard App is also a great initiative to alert someone when you are in danger, and I know some of the club members have it on their phones.

The Captain’s Charity starts from the Club AGM, and many members donate to it instead of sending Christmas cards to other members. We also raise money in a number of ways throughout the year.

At opening of the green in April we have a ‘spider’ where all those present pay £1 and bowl all at once towards a jack in the middle of the green. The nearest to the jack wins a bottle of whiskey.

During the season, the Captain can give out fines during his speech after the game. This can be for things like; not turning up for the match in blazer or tie or failing to wear them to tea afterwards, bowling a wrong bias, playing in the wrong colour trousers, drinking on the green, not filling in the score card correctly, and leaving equipment on the green afterwards. It is all very light hearted, and the fines are taken in good spirit. With around 75 games played during the season, the money soon mounts up. Quite often the opposition will also join in and donate money to the Charity.

We also have a Club Tour in September when we go away from Monday to Friday and play each day. Around 50 people go on the tour, and this year we went to Barnstable where we raised over £200. People get fined on tour for even more obscure reasons on tour!

Finally we have Captain’s Day at Closing of the Green at the end of September. We ran another ‘spider’ then, and during the season members donate prizes for a raffle. This raffle raised over £200. We also ran a fun bowling competition at Closing of the Green, with the prize being a bowls bag donated by Bowlswear Direct. They have a shop at the National Finals held at Leamington every year, so I asked if they would like to donate a prize and they kindly agreed.”

What an amazing effort!

Nick Gazzard said: ”It was such a pleasure to meet Jon and all the team at Barnwood Bowling Club. They have been such a fantastic support and to raise £1,500 is incredible. Thank you to everyone at the club and beyond who have contributed. We feel really connected to the club as Jon’s daughter knew Hollie. It means so much to have the support of a community and Barnwood Bowling Club have really put their heart and soul in to supporting the charity.”