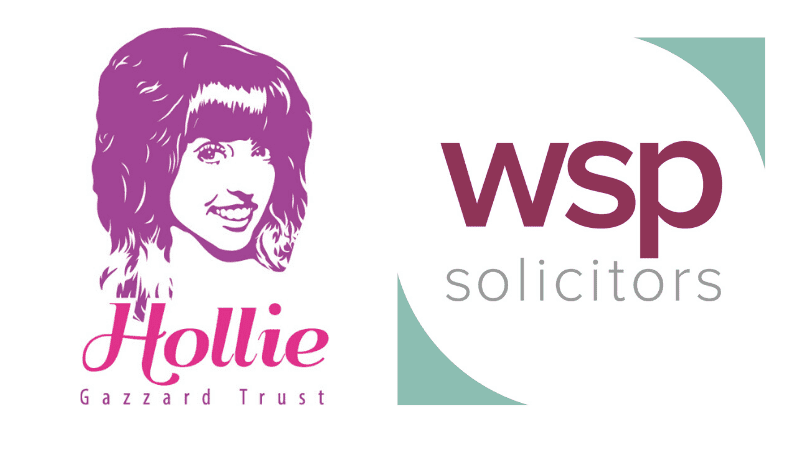 We are delighted to announce that we are collaborating with WSP Solicitors.

WSP Solicitors will be offering their expertise to anyone considering leaving a legacy donation to the Hollie Gazzard Trust in their will.

Nick Gazzard, Founder of HGT met WSP Solicitors when they took part in the ABC (Active Bystander Communities) workshop last year, held at Cheltenham Town Football Club. Following the workshop, WSP Solicitors reached out to offer support for the amazing work the Hollie Gazzard Trust is doing to help raise awareness of domestic abuse in Gloucestershire and throughout the UK.

The Hollie Gazzard Trust is a Gloucestershire based charity that was created following the murder of 20-year-old Hollie in 2014. Hollie had experienced domestic abuse and stalking prior to being fatally stabbed by an ex-partner at her place of work.

The Trust delivers programs in schools, colleges, to businesses and other organisations to help build individual and community resilience to domestic abuse. In 2015, the Trust launched Hollie Guard; a free app named after Hollie which turns your smartphone into an advanced personal safety device.

Hollie Guard is suitable for us all to use to stay safe. If in danger simply shake or tap your phone to generate an alert, your location, audio, and video evidence of the incident will automatically be sent to your emergency contact via text and email.

In addition to Hollie Guard, we can offer a new 24-hour monitored service (7 days a week) for those who need an additional level of security; Hollie Guard Extra.

This service is provided by a dedicated emergency response team who are fully equipped to assess emergency situations and are trained in appropriate escalation procedures.

Hollie Guard Extra users will be able to alert a dedicated 24/7 monitoring service, who can then contact the emergency services if necessary. There is a small charge to cover the costs of providing this service but the Hollie Gazzard Trust is working hard to raise funds so that those most in need will have access to this service at no cost.

Nick Gazzard said: “During this outbreak of covid-19 we have seen a spike in downloads and users of Hollie Guard. However, the statistics are harrowing, and we know we can reach out to more people who need support and safety from violence and coercive behaviour. Our hearts go out to anyone who has suffered or is suffering and our message to them is please seek the support, which is available, support that Hollie sadly did not have.”

By leaving a legacy in your will to the Hollie Gazzard Trust you help thousands of people across the UK live a safer and more confident life.

Legacy income accounted for £2.8 billion of donations in 2018, making it the largest single source of voluntary income to the charity sector and vital to the survival of many charities. Yet only 6 per cent of people leave a gift to charity in their will.

A representative from WSP Solicitors said “Looking after friends and family must always be the priority. If you are also able to include a gift to charity in your Will, that will be free from Inheritance Tax. For those in a position to do so, leaving 10% or more to charity will lower the Inheritance Tax rate for the estate from 40% to 36%.”

You don’t need to be well off to be able to do it. The reality is that even a small amount can make a big difference. Making a will is particularly important. If you do not have a will when you pass away, your money, property and possessions will be shared out according to the law instead of your wishes. This can mean they pass to someone you had not intended – or that someone you want to pass things on to ends up with nothing.

WSP Solicitors are here to help make things easier for those wishing to leave a donation in their will to the Hollie Gazzard Trust.

You can get in contact with them, or simply find out more information here: https://wspsolicitors.com/legal-services/for-you/wills-trust-probate/