A production of Educating Rita was presented by the Everyman Theatre’s professional company and performed by Mark Carey and Dani Carbery at the King’s Theatre in Gloucester on Saturday 24 January in aid of the Hollie Gazzard Trust. It was a thoroughly entertaining evening, brilliantly performed and directed by Paul Milton.

Willy Russell’s play Educating Rita is a modern classic. It tells the story of hairdresser Rita, who feels that life has passed her by. She wants an education. But does Open University lecturer Frank have anything to teach her? Educating Rita is a hilarious, and moving, story of a woman’s determination to change her life. (does this remind you of Hollie?)

Director Paul Milton said ‘..We are happy to be here in Gloucester with our production of Educating Rita, a play that has been performed at the Everyman before, but is surely ripe for revival. It’s a twentieth-century classic and has been voted one of the most popular plays of all time. Even though it’s a comedy I hope you found the serious themes too – a working woman’s place in society, the purpose of education, midlife crises and others..’

A great evenings entertainment and HGT would like to thank the Everyman for this performance and donating the proceeds to the fund. we would also like to than the Kings Theatre for it’s hospitality. A great intimate theater and we look forward to working with the Everyman in the future.

Nick, Mandy and Chloe pictured here with the cast and Director Paul Milton. 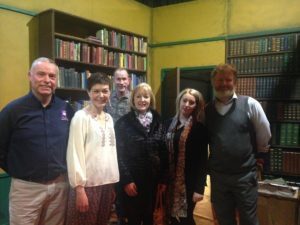