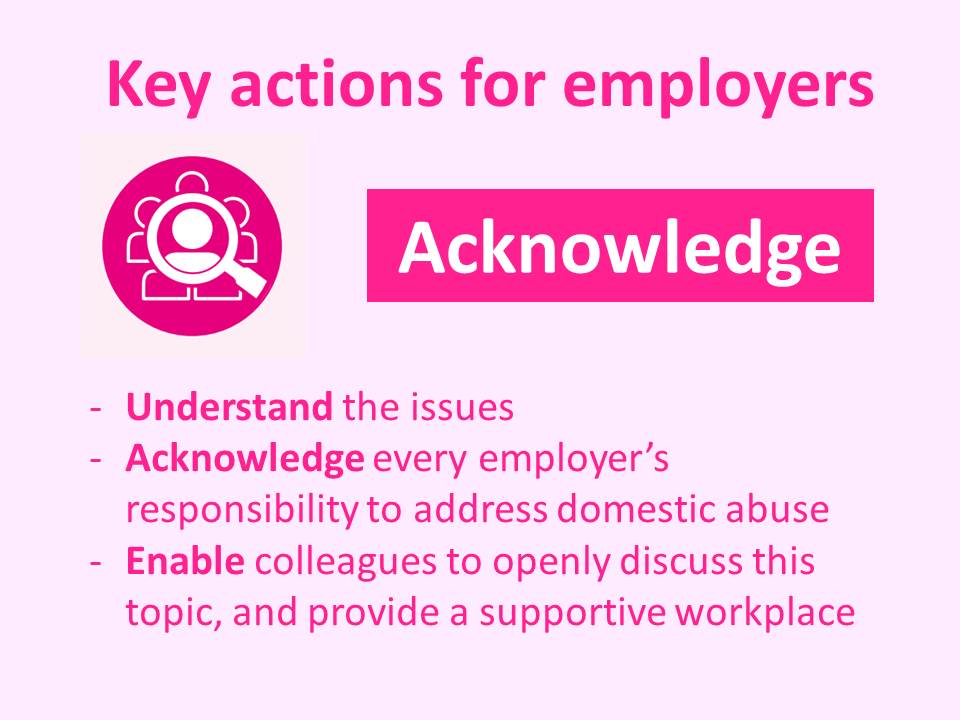 As part of the international 16 days of action movement which launches today (25 November), Public Health England South West is calling on employers across the region to play their part in tackling domestic and sexual abuse and violence.

Domestic abuse is a hugely destructive problem and employers have an important role to play in society’s response to it. The Vodafone Foundation report showed that employers recognise that they have a duty of care to their employees, but that much needs to be done to ensure that all employees who are affected by domestic abuse receive the support they needs to be safe and to rebuild their lives.[4]

The cost of domestic abuse to business is estimated at £1.9 billion a year due to decreased productivity, time off work, lost wages and sick pay. It can potentially have an adverse impact on staff morale, as well as on an organisations image and reputation.

Research commissioned by the Vodafone Foundation revealed that only 5% of organisations have a specific policy or guidelines on domestic abuse. Employers can send a clear message that domestic abuse is not tolerated inside or outside the workplace by developing and implementing a policy to tackle the problem. An effective workplace policy can raise awareness, break down the stigma around speaking out about domestic abuse, and create a supportive environment where employees affected by abuse can acknowledge to themselves or their employer that their relationships are abusive or coercive.  Smaller employers can also tackle domestic abuse by committing to be ‘domestic abuse aware’ and making information available to employees on what to do if they have concerns.

PHE worked in partnership with Business in the Community to develop a simple toolkit to help any organisation make a commitment to respond to the risk of domestic abuse.

Housing association, Curo provides extensive support across the South West to customers affected by domestic abuse and has pioneered innovative and award-winning training to help colleagues identify the signs of abuse that are often hidden behind closed doors.

As a major employer Curo also recognises the need to ensure the workplace is a safe place for colleagues who might be suffering from domestic abuse themselves, as Curo Human Resources Business Partner Gail Larkin explains:

“At Curo we aim to promote a culture where our colleagues feel comfortable raising issues such as domestic abuse with their manager, knowing that their manager will listen, be non-judgemental and provide reassurance that safeguards can be put in place to support them.

“This support could include things like changing their hours of work or phone number, providing a safe space for the colleague to meet other agencies or, if necessary, changing their work location.

“As a business we’re also providing training for managers through our Practical Manager workshops to help them understand what behaviours a colleague experiencing domestic abuse may display and how to recognise the warning signs and open up the conversation in a sensitive, supportive way.”

Nick Gazzard’s daughter Hollie was tragically murdered at her workplace in 2014. Nick and his family set up the Hollie Gazzard Trust to reduce domestic violence  through creating and delivering programmes of domestic abuse and promoting healhy relationships to schools and colleges.

In support of the 16 days of action, Nick said ‘With research showing that one in four women and one in six men will experience domestic abuse at some point in their lifetime, it is likely that the majority of workplaces employ staff who have experienced, or who are currently experiencing abuse, as well as employing those who are perpetrators. This has a profound effect on mental health and businesses are starting to recognise this and that they need to act but often feel ill equipped to do so. Spotting the signs, intervening early and signposting appropriately is essential for all businesses. Appropriate training for line managers, raising awareness with all staff and creating a culture of disclosure will help improve the wellbeing of all staff. Businesses have a legal and moral obligation to protect their staff.

‘Abuse and stalking is what goes on behind ‘closed’ doors. It’s what keeps these crimes secret. It’s never one isolated incident, it’s a pattern of never-ending coercive control and violence against the victim. It takes huge bravery to admit to being abused and it takes great courage to try and leave a desperate situation. The cost to individuals is priceless, while the cost to businesses is worth billions.

‘Domestic abuse is a desperately heinous crime and has a devastating impact on individuals and businesses alike. It is imperative that businesses understand that by creating an improved culture of wellbeing for staff, the positive benefits to individuals and the organisation provide tangible real value in today’s competitive marketplace.’