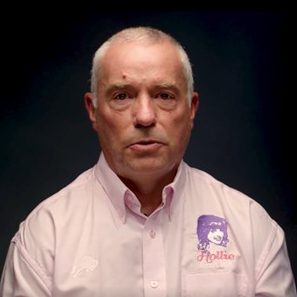 Nick has built a successful 30-year career within financial services alongside a spell at Cheltenham Town Football Club. Following the murder of his daughter Hollie by her former partner, in February 2014, he felt strongly that something positive should come out of Hollie’s death and created the Hollie Gazzard Trust. Nick is determined to try and prevent similar tragedies by increasing awareness of domestic abuse and stalking and the devastating effect it causes.

Nick’s dedication and tireless hard work for the trust is expanding to further work across the country. Nick is a Keynote Motivational Speaker and has spoken at a variety of conferences and training events nationwide. He has inspired many people with the story of how he gave a devastating experience a positive outcome, highlighting his passion for helping others. Recent projects have included helping launch the Black Country Stalking Support Service; delivering Working Without Fear a dedicated programme supporting businesses and organisations in helping them understand the importance of raising the awareness of domestic abuse and stalking in the workplace and the impact that this has. Helping them to create an environment where staff are comfortable with coming forward, train staff and management to handle those difficult conversations, what to look out for and what to do when disclosures are made. He also working with Exeter University and
Public Health England on creating and delivering a program ’Football Onside’ talking violence and abuse in football and sport through bystander intervention.

Nick is a keynote speaker at a variety of events examples include ‘Beyond the Bruises’ conferences in London on the new domestic violence legislation and statutory guidance framework, Domestic Abuse Masterclass at Gloucestershire University; ‘Behind Closed Doors’ Domestic Abuse and Stalking Conference in Gloucester and Bristol. He was a keynote speaker alongside Professor Evan Stark at Safer Poole’s conference on tackling coercive control and domestic abuse; Fylde Women’s Aid ‘Tough Love’; NHS safeguarding; Greenwich Adult Safeguarding Board; Hampton Trust, the Isle of White Council’s inaugural conference on violence against women and girls (VAWG); London
Ambulance Service NHS Trust Safeguarding conference.

Through his work with the Trust, Nick has been instrumental in developing concepts including Hollie Guard, a next-generation smartphone personal safety app. Hollie Guard is recommended by many police forces across the country, Charities and agencies for those experiencing domestic abuse and stalking.

Back to Patrons Page
Nick Gazzard