Golfers Swing in to Raise Funds

Following the cancellation of our annual Golf Day fundraiser, colleagues of Nick Gazzard from DAS Insurance took fundraising efforts in to their own hands.

Two teams of 3 including; Group A: Russ Levan, Stuart Carr, Joe Shackle (ITEC) and Group B: Lee Sawyer, Steve Marsh, Andy Ball, enjoyed a fantastic day at The Players Club, near Chipping Sodbury, to fundraise for the Hollie Gazzard Trust.

On arriving the players took to the practice areas to for some last minute fine tuning. At 10:04 the first group were off, some with more success than others, closely followed by the next group. Around 4 hours later they completed the course, then went to the club house for some lunch and a deserved drink and stories of the day.

Lee Sawyer said: ”Everyone enjoyed it, the weather was perfect, course in great condition and we even managed to play some half decent golf!” 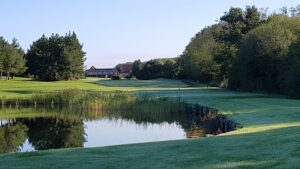 Results from the day;

Congratulations to Group A who took the honours with two best combined stableford point haul of 74 with Team B scoring 68.

Nick Gazzard said: ”I’d like to thank all the guys who took to the course to play on behalf of the charity. We’d also like to thank everyone who donated. The Golf Day is a big fundraiser each year for us, which was a big disappointment to have to cancel, but for my colleagues to step up and raise some funds for us is absolutely fantastic. Thank you all.”